The Legislature is an important tool of provincial government in South Africa, aiming at deepening democracy, effective public participation and efficient lawmaking.

The study tour entailed the establishment of a network with relevant local authorities in Portugal and the understanding of its structures of local government and projects. For that purpose, the twelve member delegation visited the Municipalities of Gaia (third biggest municipality, North region), Maia (important industrial municipality in the North of Portugal), Guimarães (historical municipality-the cradle of Portugal), Coimbra and Lisbon (capital and biggest municipality). The delegation was also received by the Vice-Rector of the University of Coimbra, the oldest academic institution in Portugal and one of the oldest in Europe. The last part of the visit entailed a visit to the Parliament where the delegates interacted with the Portuguese MPs: Mr Laurentino Dias (former Secretary of State for Sport), Mr Fernando de Jesus (PS, Socialist Party, leading opposition party) and Mr Leitão Amaro (PSD, Social Democrat Party, ruling party) who will both be attending the COP 17 Conference taking place in Durban from 28 November to 9 December 2011.

On 11 November 2011, the staff of the South African Embassy had a wonderful get-to-gether with participants in the Academia Ubuntu, a programme to teach leadership skills to young people of African origin, which culminated in a week-long visit to South Africa last September.  Following a lunch which combined South African wors, pap, chakalaka, koeksisters and milk tart with São Martinho´s typical chouriço, caldo verde, chestnuts and água pé, the staff had the opportunity to view a photo presentation and video of the Academia Ubuntu’s visit to the Western Cape, which took them to places such as District Six Museum, Slave Lodge Museum, Castle of Good Hope, Guguletu, Cape Point and Robben Island, where they also spent a night.

In South Africa, the group of 20 participants was generously hosted by the family of Professor John Volmink, who among other things is the President of the Cornerstone Institute – Christian Higher Education for Leadership in Africa.  With the continued support of Portugal’s Gulbenkian Foundation, the Academia Ubuntu plans to go on working with this marvelous group of young people who certainly deserve to be supported in their efforts to become leaders in their respective communities and fields of work.  The Embassy wishes them much success! 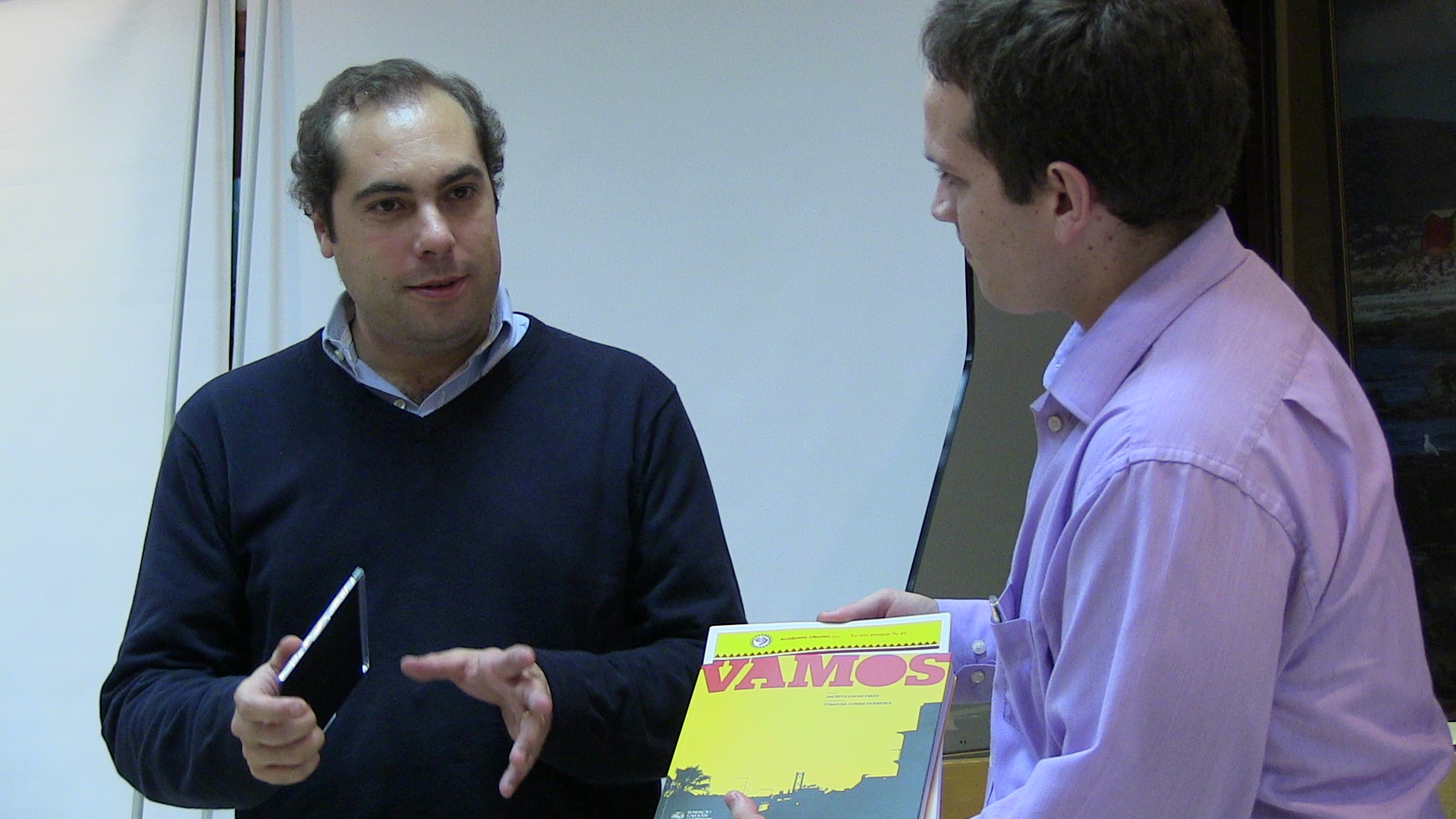 Rudolph Stroebel, some souvenirs of the Academy's year-long experience 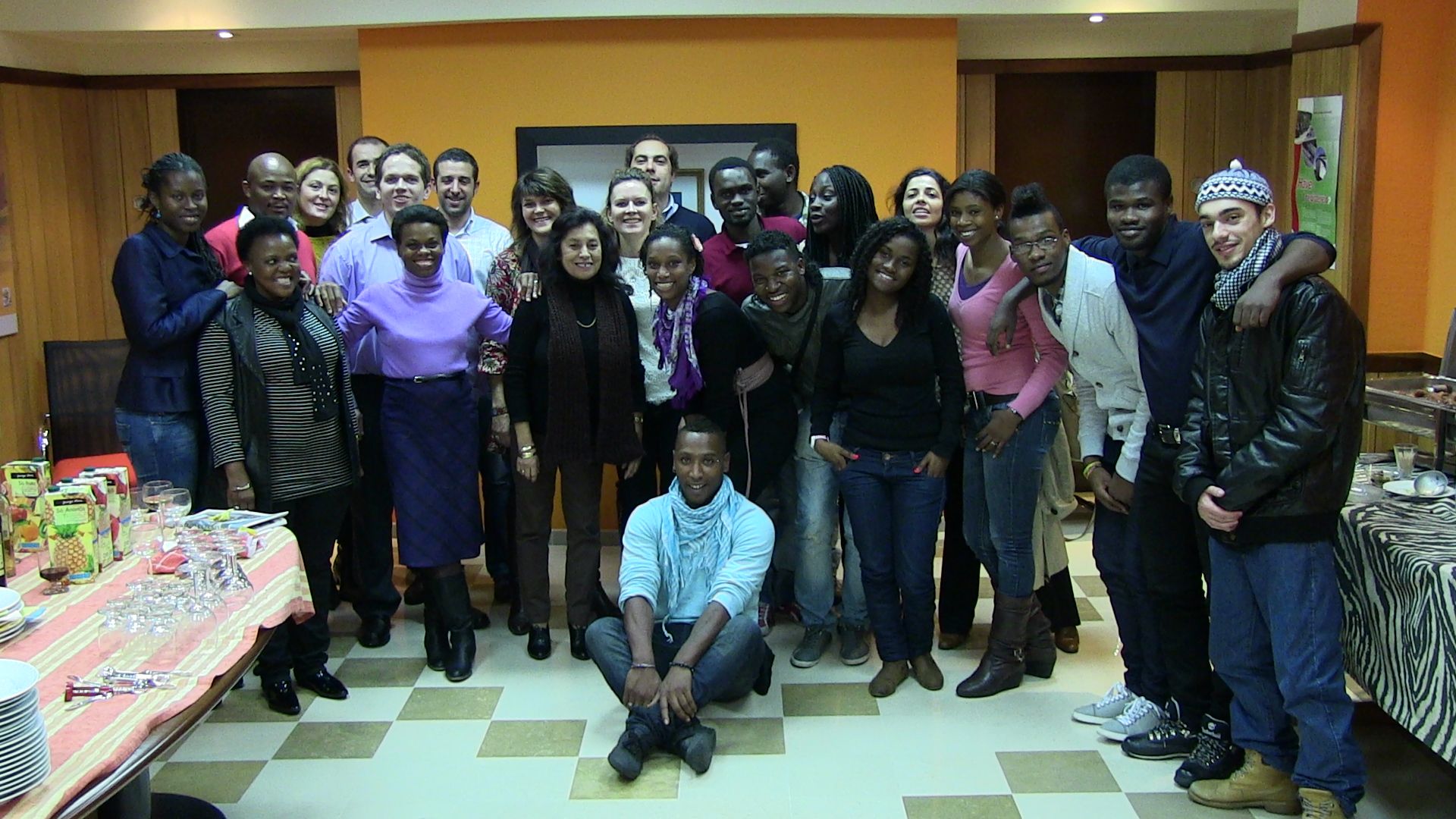 Embassy staff with participants of the Academia Ubuntu

On 13 October 2011, at the invitation of AIP, South African Embassy participated for the fourth time in Portugal Exportador.Mr. N. Sifuba, Second Secretary Trade and Tourism attended the event and held several meetings with Portuguese businesspeople interested in developing trade and investment relations in the South African market. Agro-industry, IT and food were some of the sectors of interest. The Mission’s active interaction with AIP and participation at this event makes part of Mission’s strategy to promote the trade relations between the two countries as a stepping stone to future Portuguese investment in South Africa.

Mr Sifuba in a business meeting with a Portuguese company

On 1st October 2011, at the invitation of APAT (Portuguese Freight Forwarders Association), Mr N Sifuba, Second Secretary for Trade & Tourism was a guest speaker at the National Congress of the Association in Tróia, Setúbal. The Voice of Internationalisation was the theme of the panel and Mr Sifuba made a presentation on the South African market: economic background, international and bilateral trade relations and the transport sector. The pannel had also the participation of the Embassy of Algeria, a consultant of the Chinese Chamber of Commerce and of AICEP, the Portuguese Trade & Investment Agency.

On 27 September 2011, at the invitation of AIDA, Aveiro Business Association, Ambassador K. Matthews and Mr. N. Sifuba, Second Secretary Trade and Tourism, made a presentation on the business environment and opportunities in the South African market. The seminar, attended by more than 30 local businessmen, was a follow up on contacts already developed further to a multi-sectorial business delegation that visited South Africa in 2010. The seminar was hosted by Mr. Paulo Leite, director at AIDA and AICEP-Portuguese Trade & Investment Agency was also a speaker at the event. 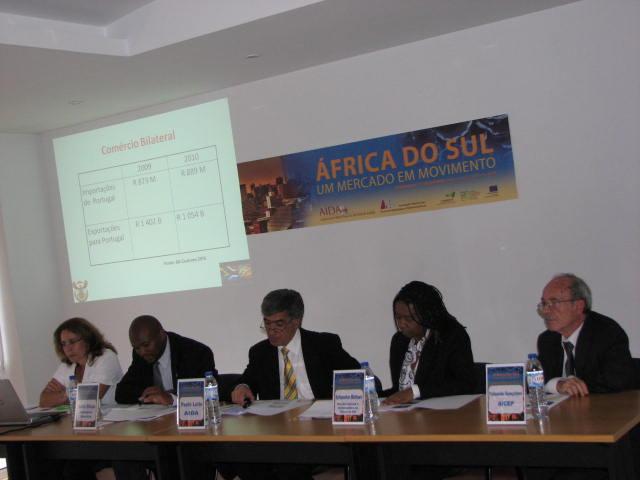 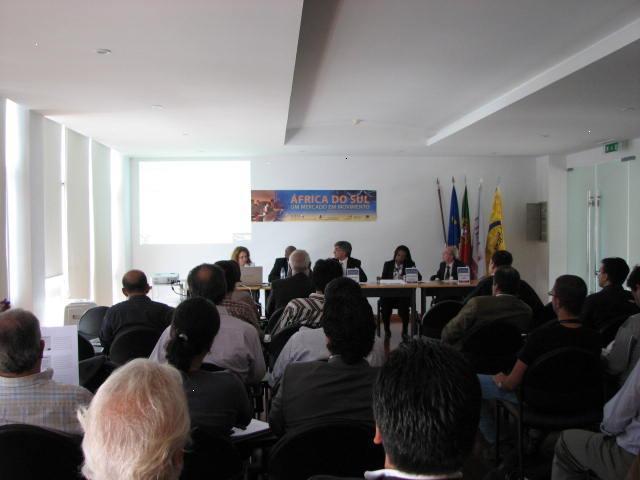 The event took place at the Pestana Palace Hotel, in Lisbon, on 18 July 2011, coinciding with Nelson Mandela's 93rd birthday.  The Chairman of the Fundraising Committee is Mr. Tito Mboweni, the former Governor of the South African Reserve Bank, delivered the keynote address on behalf of the fund.

One of Nelson Mandela's wishes has been that South Africa should be able to offer the children of South Africa, Southern Africa, and indeed Africa, a state of the art children's hospital.  It is his belief that such an institution must be of the highest excellence in standards and care, focus on specialist paediatric medicine and training, receive academic and tertiary referrals, be child centered and provide medical services to children across Africa irrespective of their social and economic status.

The Nelson Mandela Children's Hospital Trust, through the assistance of the South African Embassy in Portugal, has formed a strategic partnership with the São João Hospital's Children Wing.

Special video messages from Mr. Nelson Mandela and Mrs. Graça Machel were shown to guests at the dinner.

A lithograph depicting Nelson Mandela delivering his first speech in 27 years on the day of his release from prison on 11 February 1990, by documentary photographer and artist Chris Ledochowski, was also auctioned as well as two books on Nelson Mandela.

The Embassy wishes to thank the sponsors of the event:

For the third consecutive year, a delegation of 18 crafters traveled from South Africa to participate in Lisbon’s International Crafts Fair (FIA), at the FIL (Parque das Nações), from 25 June to 3 July 2011.The crafters, selected by the Department of Trade and Industry (DTI), represented the diversity and wealth of South African craft works.Within the South African government’s goal of creating better living conditions for all of its population, these crafters are integrated in NGOs or small cooperatives or companies that offer employment opportunities, training and new markets for their products.

On 27 April the South African Embassy in Lisbon celebrated South Africa's National Day with a reception at the official residence, hosted by Ambassador Keitumetse Matthews. This was the Ambassador's first National Day in Portugal and it was a pleasure to have the opportunity to meet with so many of South Africa's friends and admirers. As usual, the sunny weather helped to create the perfect atmosphere for the outdoor meal served in the garden. The Embassy wishes to thank all those who joined us in celebrating South Africa's great achievements of the past 17 years.

A group photo of Embassy staff and family