Last 23 and 24 November 2012, the South African Embassy had the pleasure of participating in the 2012 Diplomatic Bazaar, the proceeds of which will this year go to institutions supporting the elderly.  The Embassy would like to thank all of its partners for helping to make the Bazaar a success and for their kind generosity, namely Vanessa Azevedo with her beautiful custom jewelry from the Cape, Joaquim and Rosário Alfaiate with their lovely graphite statuettes and stone necklaces and Zita and Isaura Silveira for their expressive paintings.  Carlos Neves and Graça Jesus also participated for the first time with their beautifully carved ostrich, goose and chicken eggs.  Graça Jesus is one of only two people in the world who embroiders eggs, with Graça using the traditional Viana do Castelo motif to decorate goose eggs.  Thank you so much for coming all the way from Viana to participate with us!  You can see and read more about these eggs by visiting http://ovoseven.blogspot.pt/.  Lastly, we’d also like to say a special thanks to the GB Store in Cascais for providing us with a selection of South African savoury treats, including biltong.  For more info visit http://www.gbstore.org.  And again thank you to all of the ladies who put so much hard work into organizing the Bazaar.  You’re efforts and dedication are highly appreciated! 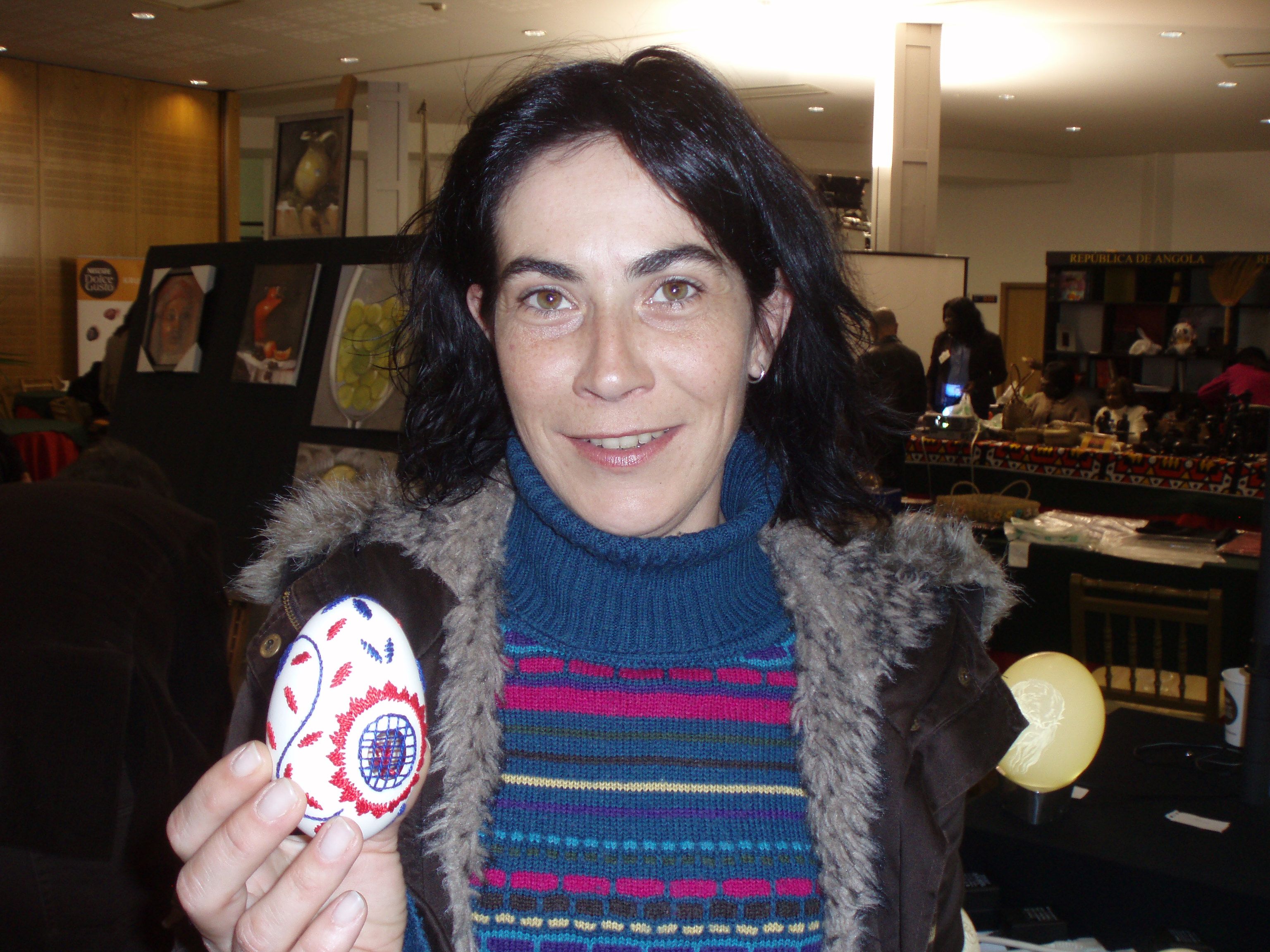 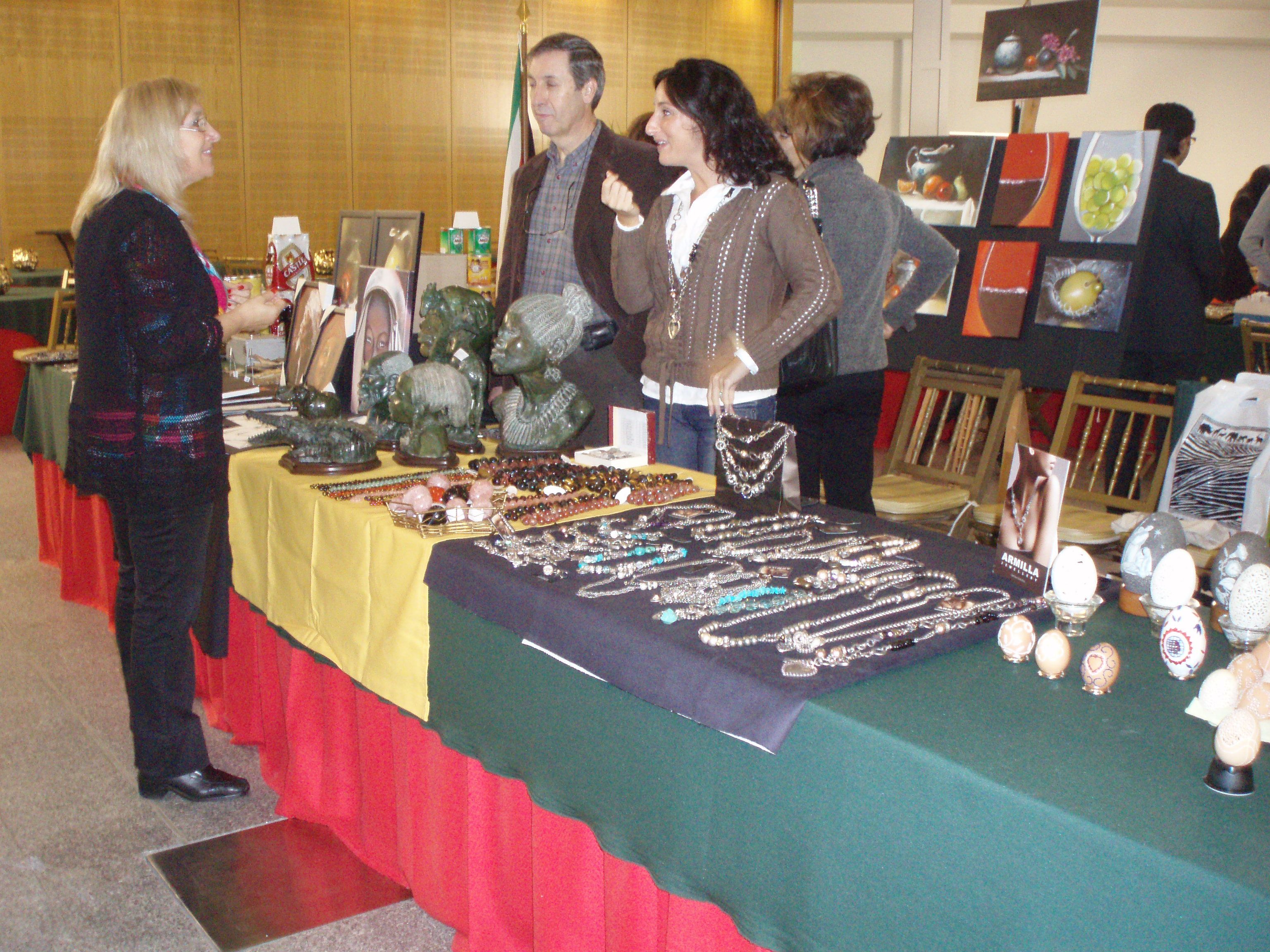 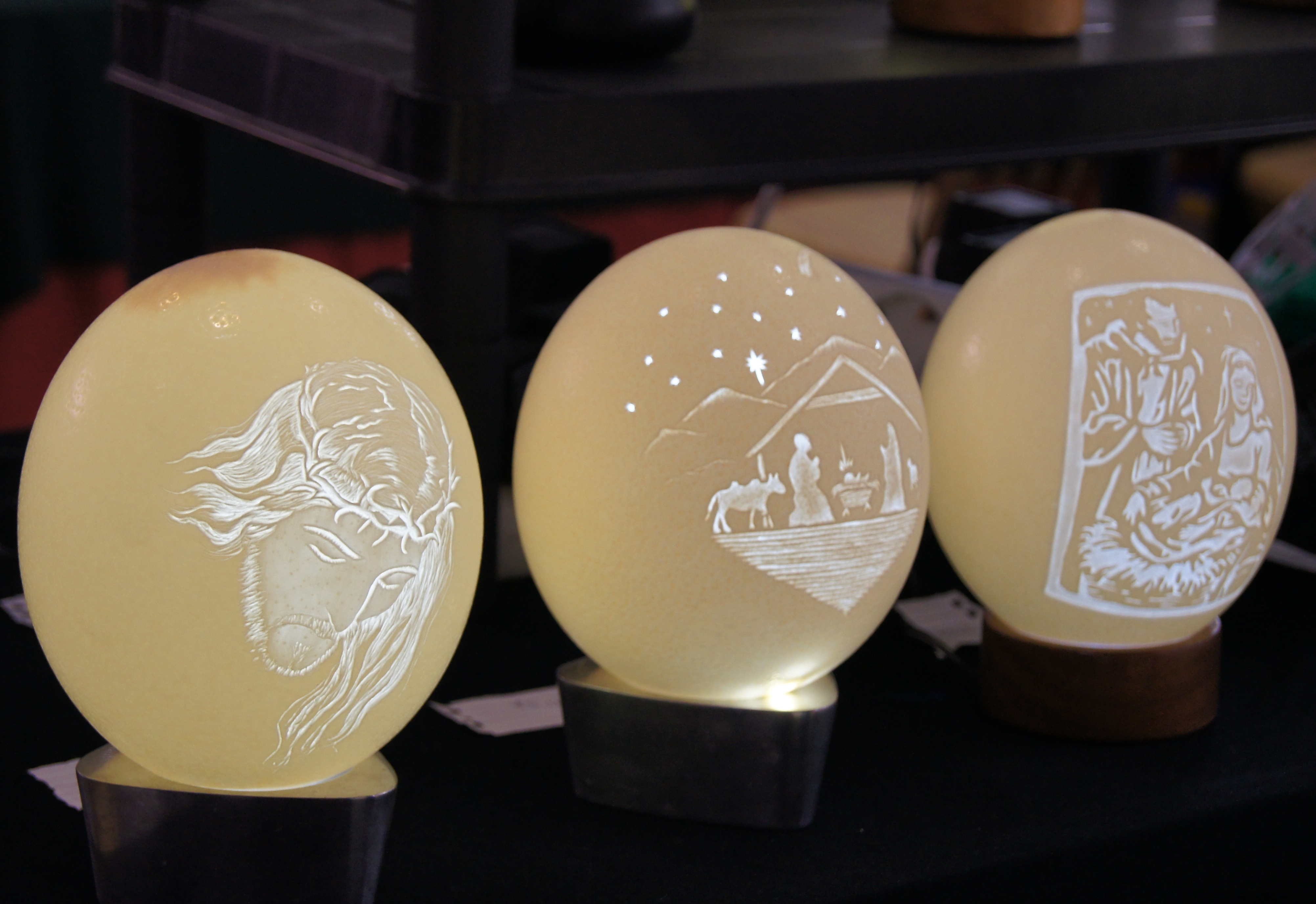 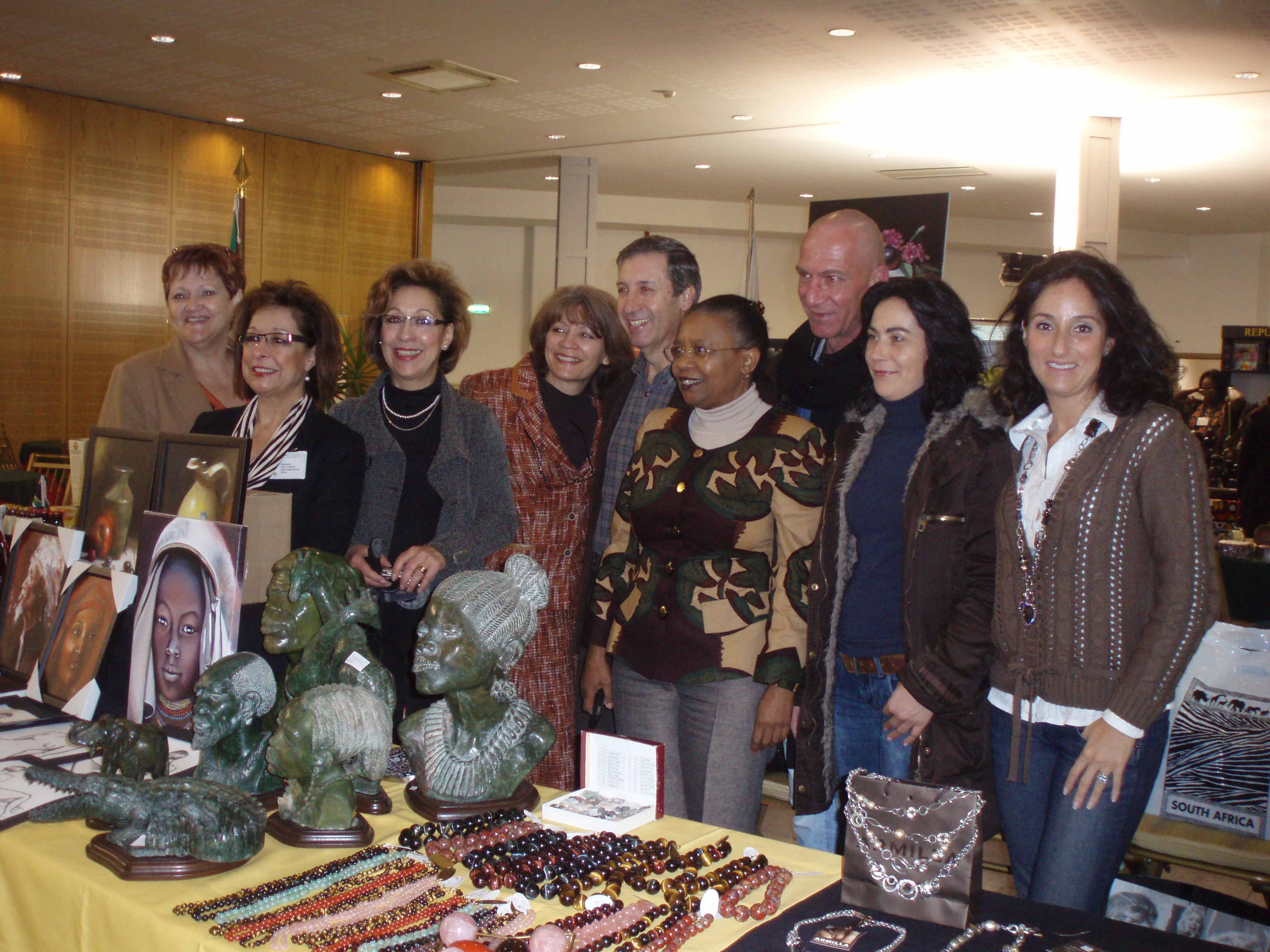 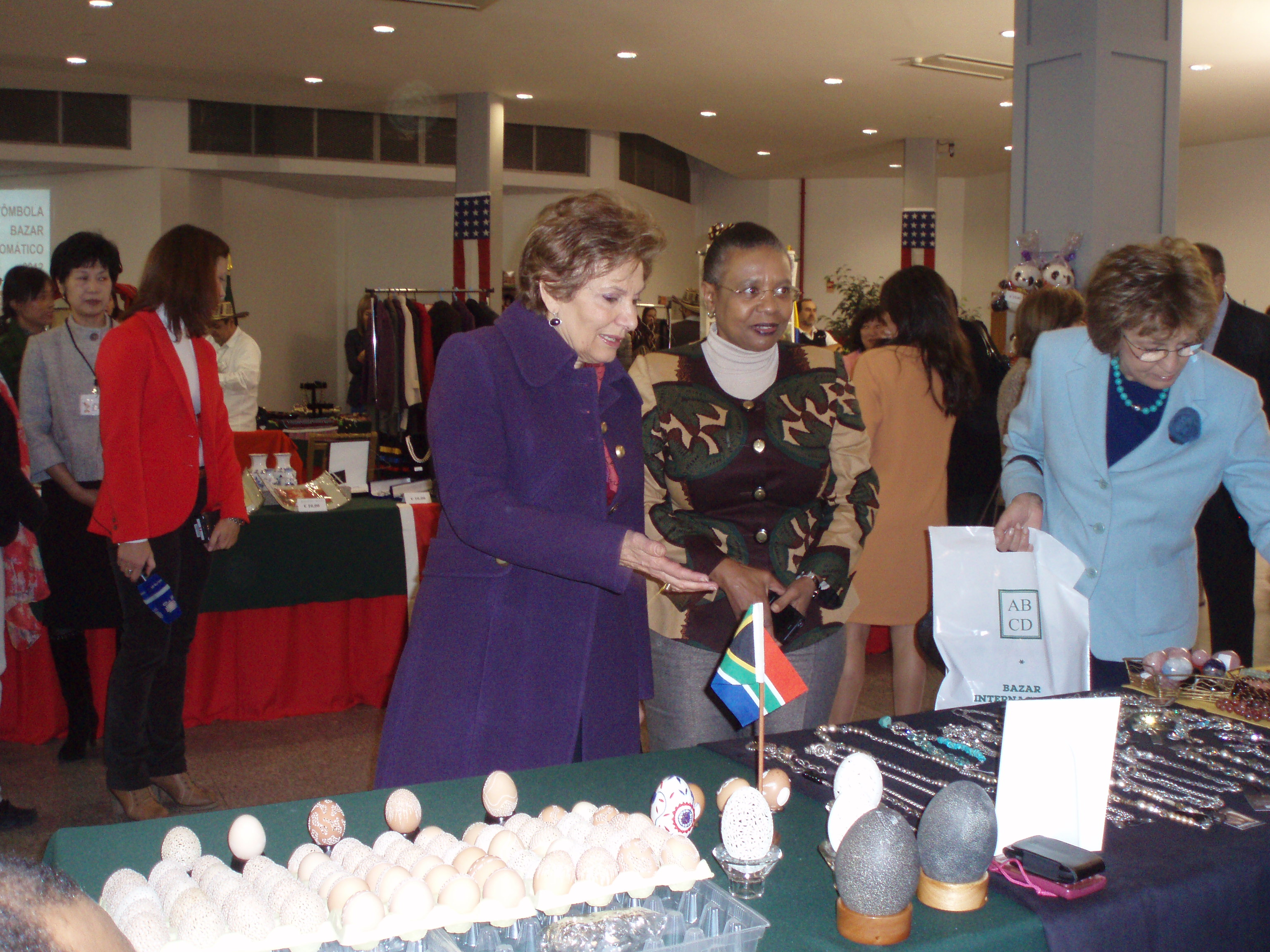 The South African Embassy was invited to be part of Portugal Exportador 2012 which took place in the Lisbon Congress Centre in Lisbon on the 21 November. Organized by AIP and AICEP (the governmental agency for trade promotion) and sponsored by BES bank, the event was widely covered by all the Portuguese economic media and well attended by businessmen.

The Embassy participated in the foreign embassies’ stand area, together with other 46 economic representatives from Africa, Latin America, Middle East, Asia and Europe.  In coordination with CCILSA (Luso-South African Chamber of Commerce), the Embassy held nine one-on-one meetings with potential trade and investment partners in the areas of IT, software, food products, agro-processing and consultancy. Trade & investment brochures with relevant information were also available.

Portugal Exportador is a unique chance to promote South Africa as a sophisticated and promising emerging market for trade and investment and also to strengthen the existing contacts. The active interaction with AIP, AICEP and CCILSA at this event makes part of the Embassy’s strategy to promote the trade relations between the two countries as a stepping stone to future Portuguese investment in South Africa. 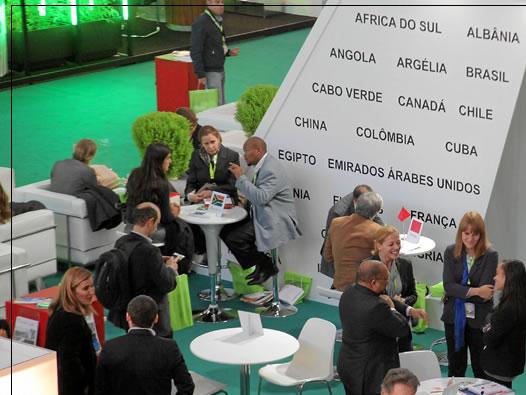 In preparation for a trade delegation to South Africa  6-9 November 2012, the Mission was guest speaker at a Seminar at the Portuguese Agency for Energy ADENE’s   headquarters in Lisbon. The delegation plans to attend Power-Gen Africa/Renewable Energy World Africa (taking place in Sandton 6-8 November) with a 120m2 national stand to further promote the Portuguese acquired know-how in the sector.

Mr. N Sifuba, First Secretary, addressed the targeted audience of entrepreneurs in Renewable Energy with a presentation on the South African market in general and current opportunities the RE sector. BEE policies, the Integrated Resource Plan (IRP) 2010-2030 and the ongoing Renewable Energy Independent Power Producer Programme (REIPPP) were some of the subjects presented by Mr. Sifuba that was also addressing some of the questions raised by the attending businessmen. The Mission actively liaised and involved CCILSA, the Luso-South African Chamber of Commerce in all contacts with ADENE.

On 15 September 2012, Mr Rudolph Stroebel, First Secretary at the South African Embassy in Lisbon addressed an audience at the Portuguese Association of Environmental Engineering (APEA) 2012 Summer Course on the renewable energy sector in South Africa, its legal framework, the ongoing developments and emerging business & investment opportunities in the South African and African business sector. He was supported by Ms Vicky Rodrigues from the Luso-South African Chamber of Commerce (CCILSA) who gave an overview of South Africa and the current bilateral trade relations between Portugal and South Africa.

The Portuguese Association of Environmental Engineering (APEA) 2012 Summer Course was held at the Institute for Higher Management Studies (ISG) from 6 – 15 September 2012 under the theme The Internationalisation of the Environment and Energy Sector. The last day (15 September) was dedicated to Specific characteristics and business opportunities in Africa.

The event was a partnership between APEA, ISG and CIGEST, the R&D Center for Management Studies of the Lusofona University. 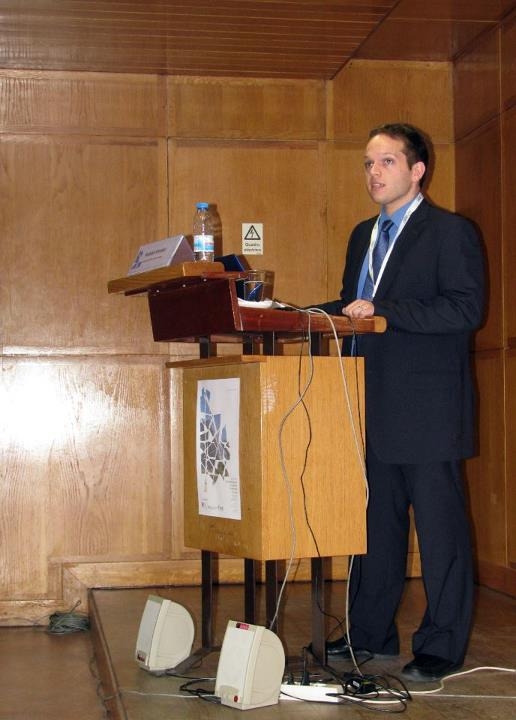 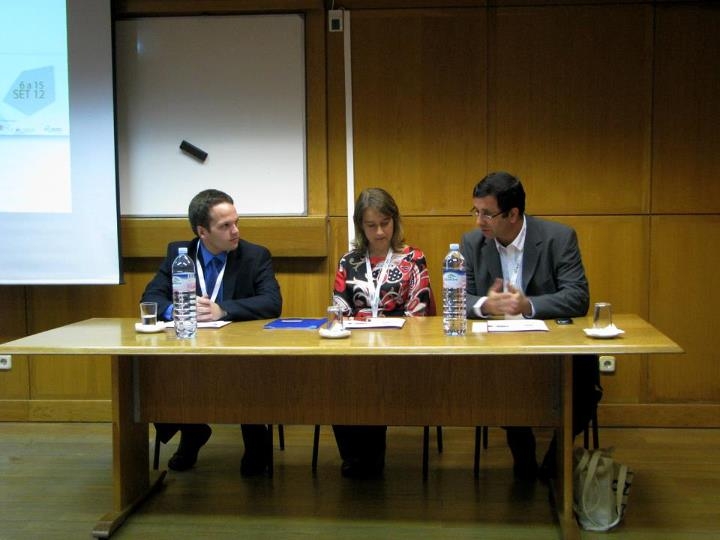 This year Nelson Mandela, who turned 94on 18 July, again called on people to give a little of their time to helping others with a special focus on children. It was within this spirit that the staff of the South African Embassy joined a group of children from the Fundação “O Século” in celebrating Nelson Mandela International Day. The Embassy contributed 94 minutes of its time in honour of Mr Mandela’s 94th birthday.

The Embassy officials opened their hearts by donating a special afternoon snack, some souvenirs and face painting as well as a talk on Nelson Mandela’s life work and South Africa. Everyone sang Happy Birthday to Nelson Mandela and blew out the candles of a birthday cake. The children brightened the event by dancing while everyone clapped and offered their drawings and compositions on Nelson Mandela.

Besides the Embassy’s diplomats and local staff, the event was attended by the President of the Foundation, Dr. Rodolfo Crespo, and several members of the institution.  RTP-Informação covered the event which was broadcast later the same day.

The visit is part of the Mission’s strategy to promote economic diplomacy by engaging with municipalities with innovative and successful infrastructural projects that contribute to a better environment, improved quality of life of populations and job creation. The Mission is actively liaising with relevant partners for future jv with South African municipalities and companies, promoting transfer of skills and investment relations between the two countries.

The Honorary Consul of South Africa in Porto, Mr. António Schneider, Mr. N Sifuba, First Secretary for Trade & Tourism and Mrs. Rodrigues, Trade Assistant, were warmly welcomed by Mr. Mário Montemanha, Councilor for International Relations of Gaia Municipality, one of the biggest municipalities in the country. Gaia Municipality has developed and implemented an efficient network of waste treatment over the last 14 years. The South African delegation visited two state-of-the art facilities for solid waste treatment (Suldouro) and wastewater treatment (ETAR Gaia Litoral) that are used for recycling and energy production. 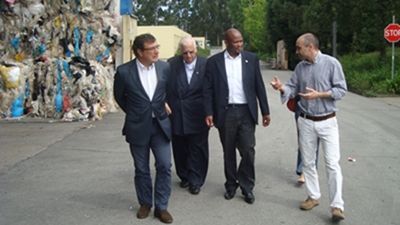 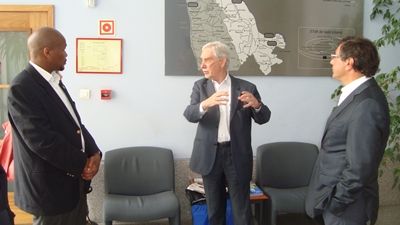 The South African delegation also visited Maia Municipality and was hosted by Mr. Paulo Ramalho, Councilor for International Relations and Mr. Paulo Vilarinho, Head of International Relations of Maia Municipality. Leading Portuguese companies have their headquarters in Maia municipality, such as Sonae, Efacec or Frulact (all investors in South Africa). Maia also hosts one of the most sophisticated science and technology parks in the country (Tecmaia).

The Municipality has developed and implemented an efficient network of waste treatment over the last 20 years. The South African Embassy delegation visited two facilities for solid waste treatment (LIPOR I&II) and wastewater treatment (Parada) that are used for recycling, incineration and energy production.

The Mission used the visit to the North of the country to attend the 1st International Jewellery Conference in Viana do Castelo. This was an unique chance to engage with major players (manufacturers, designers and consultants) and to be updated on the latest developments on the sector’s internationalisation process, in particular to the South African market.

The event was hosted by the Mayor of Viana do Castelo, Mr. José Maria Costa who acknowledged the presence of the Embassy officials. Representatives of the Jewellery Association of the North and South of the country were present, as well as academics from the University of Minho (institution involved in R&D for jewellery sector), a representative of the World Gold Council and officials of the Portuguese Trade & Investment Agency (AICEP). 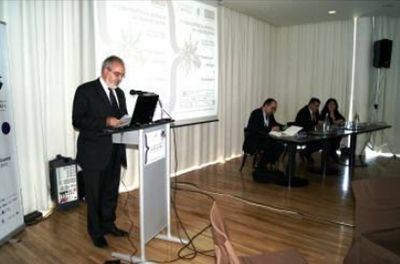 Opening remarks by the Mayor of Viana do Castelo,  Mr. José Maria Costa

Between 8 and 11 May 2012, the South African Embassy participated in the roadshow known as “Os Especialistas” (The Specialists), with the objective of promoting South Africa as a top tourism destination among Portuguese travel agents.  The event took place in 4 cities: Porto, Coimbra, Lisbon and Vilamoura.

The roadshow maintained the same format as in previous years, starting with a workshop followed by a dinner and ending with the traditional raffling of prizes among the participating travel agents.

The turnout was quite positive, with 307 travel agents taking part in Porto, 98 in Coimbra, 105 in the Algarve and 160 in Lisbon.

Over the past few years the Embassy has used this annual event to actively promote South Africa as a holiday destination among Portuguese travel agents and to update them about the diversity of experiences and products that the country has to offer.  It is a unique opportunity for the Embassy to communicate directly with tourism professionals from different regions of the country and to expand their knowledge about South Africa as a tourism destination. 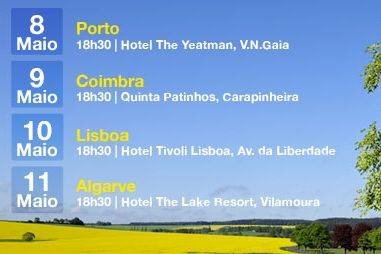 As is tradition, the official residence in Lapa opened its doors to friends of South Africa, members of the South African community in Portugal, numerous guests and prestigious members of the Portuguese government and the Diplomatic Corps accredited to Portugal as well as from various political, cultural and social sectors.

In her speech, Ambassador Keitumetse Matthews referred to this year’s Freedom Day theme, “Working Together to Build Unity and Prosperity”, recalling the progress that has been achieved to overcome many socio-economic challenges and build a truly non-racial, non-sexist, democratic and free South Africa.

In tribute to its large Indian community, the guests had the opportunity to taste several typical Indian dishes as well as the traditional gastronomy of other groups that comprise South Africa's large cultural diversity .

The warm sunny day allowed the guests to enjoy the beautiful garden of the official residence as well as the excellent view of the Tagus River. 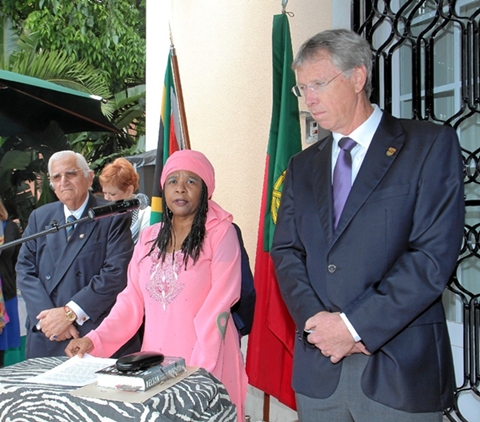 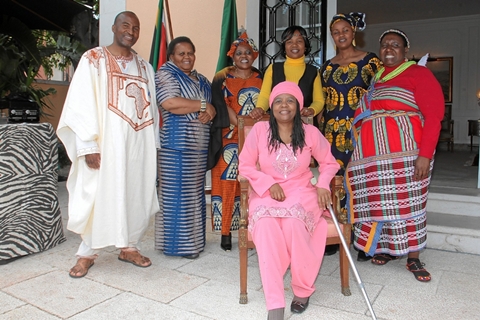