Thank you again for supporting the Diplomatic Bazaar held under the auspices of President Marcelo Rebelo de Sousa on 30 November and 1 December 2018 (see photo selection below).

We very much enjoyed selling SA specialties like biltong, wines, rooibos tea and crafts! Thank you also to our partners: Bill Godley of Prime Wine, the GB Store in Cascais and Sogenave for providing the Ceres juices.  We hope to see you all again in 2019.  It was all for a great cause - this year's proceeds will go to institutions that provide continued and palliative care.

South African tourism film productions took home three prizes at the 11th edition of the Art & Tur International Film Festival, which took place in the central city of Leiria from 23 to 27 October 2018.  Participation in the festival is part of the South African Embassy’s drive to promote tourism which has resulted in a long-term partnership with Art & Tur.  This year, the Embassy was pleased to have sponsored the entry of the Panga Productions tourism film.

Bruce and Tarryn Buttery of Durban-based Panga Productions, who travelled to Portugal a week earlier to take part in Art & Tur’s first creative factory along with six other production teams, won 2nd prize for their promotional film of Central Portugal’s historical and shale villages.  Furthermore, their film “Sea Change”, about South African surfer John McCarthy’s return to the art of making surfboards from natural materials, won 1st prize in the category of Environment and Ecology.

In a different category – Tourism  Routes – Rubert Fitchet and Rory Appleton of Sledgehammer Studio, based in Cape town, took home 2nd prize for their film “N12 – Treasure Route”, which takes us on a trip along the N12 National Route, crossing 5 of South Africa’s 9 provinces – the longest tourist route covering 1350 km.  Both Rubert and Rory also travelled to Leiria to collect their prize.

South Africa was also represented by Caroline Ungersbock of Sustainable Tourism Partnership Programme (STPP) – a speaker at last year’s Art &Tur Festival – who this year was part of the 13-member jury that evaluated over 80 films competing in the national and international competition in various categories.

It was wonderful to see South Africa competing again in the film category after several years with no entries.  We hope to bring on board many more South African tourism film producers next year not only to compete for prizes but also to showcase South Africa’s beautiful tourism attractions and abundant offer of quality tourist accommodation representing a world class tourism destination!

On 27 August 2018 Ambassador Gaoretelelwe met with Tiago Oliveira, President of the Mission Structure for Integrated Rural Fire Management System in Portugal, and was introduced to two South African wildfire management experts from Kishugu (Working on Fire), Mr. Adriaan Prinsloo and Mr. Carl van Loggerenberg. They are in Portugal over the next month to work with the operational forces of GNR (Portuguese Republican National Guard) under the technical and professional cooperation programme developed by the Integrated Rural Fire Management Agency. The meeting also included Tomas Azevedo, Diplomatic Advisor to the Prime Minister, whose Office is overseeing this programme.

Following Portugal’s tragic 2017 wildfire destruction and more recent wildfires in the Algarve and Guarda, the Kishugu representatives with wildfire experts from other countries like Australia, USA, and Chile are assisting and co-operating with the local authorities in their 2018 fire season which is currently underway. 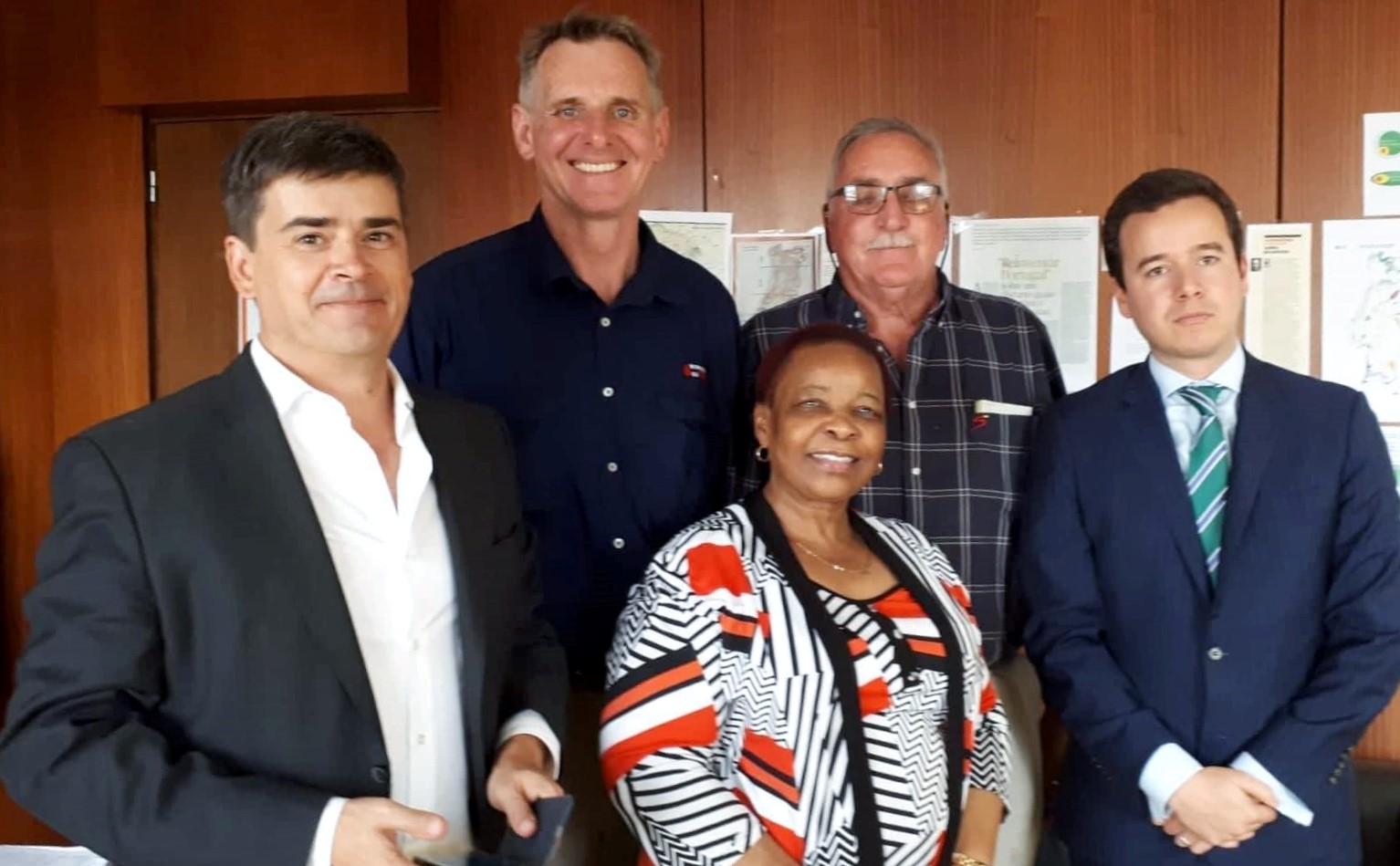 On the morning of the 18th, six volunteers from the Mission joined members of the Ubuntu Leadership Academy run by IPAV (Father Antonio Vieira Institute) in an initiative launched by the latter entitled “Mandela Bridges”.  The Embassy volunteers were split into two groups that distributed postcards with the message “Hoje é Dia de Construir Pontes” (Today is a Day to Build Bridges) to commuters using Lisbon’s Entrecampos and Sete Rios Railway Stations.  The aim was to raise awareness through the distribution of postcards that inspire for bridge building around the memory of Nelson Mandela.  Following the activity, time was also spent with members of the Ubuntu Leadership Academy, who have Nelson Mandela as one of their role models, recalling his life and message.

In the afternoon, the Embassy staff travelled to the headquarters of the Batoto Yetu Cultural and Youth Association in Caxias to participate with a group of youths in producing a hand-painting dedicated to Nelson Mandela.  Batoto Yetu is a youth and cultural association that works with children and young people who are interested in African culture. The association’s philosophy is based on the belief that, regardless of each person’s socioeconomic conditions, learning about and valuing their cultural roots is an essential factor to consolidate their self-esteem and sense of belonging!

The programme started with a short talk on the life of Nelson Mandela provided by Mr Reed Mkhohliso and Ms Maria da Luz Marques.  The hand painting organized by Batoto Yetu, which involved about 15 youths and 5 coordinators at the Association, was followed by an afternoon snack to which the staff contributed with sandwiches and fruit juices.  The staff also spent time interacting with the youths.

The South African Embassy on 27 April 2018 hosted close to 200 guests in Lisbon, celebrating 24 years of Freedom during its Annual National Day. The event also honoured fallen heroes and liberation stalwarts, this year specifically Nelson Rolihlahla Mandela Mandela, commemorating his 100th anniversary under the theme “Be the Legacy”, which was displayed in a dedicated exhibition at the event.

Ambassador Gaoretelelwe in her remarks reminded all of Madiba’s words: “Let us never be mindful of the terrible past from which we come, memory should not be used as a means to keep us shackled to the past in a negative manner rather as a joyous reminder of how far we have come and how much we have achieved.” However the Ambassador added that the country’s freedom remains incomplete without the economic emancipation of the majority of South Africans. Thus under the new leadership of President Ramaphosa and his Cabinet, Government has embarked on an ambitious new investment drive worldwide to ensure that this becomes an era of investment, growth, job creation and meaningful economic transformation.

On a lighter side, the event was celebrated with South African culture, music and dance, wines and juice and culinary favourites like boerewors and meats done in the typical “braai” style, biltong, koeksisters and a modern twist on the traditional milk tarts.