Thank you to everyone who supported the SA stand at the 2019 Diplomatic Bazaar on 15-16 November, at the Lisbon Congress Centre. We were happy to once again receive President Marcelo Rebelo de Sousa, the patron of the Bazaar, at our stand and to contribute to the worthy cause of raising funds for institutions that support people with rare diseases while also showcasing some of South Africa's crafts, fine wines, Ceres juices and food products.  Thank you to Prime Wine, the GB Store and Sogenave for their continued support in making the SA stand a great success!

South Africa won Best International Tourism Film Award plus three other Awards at the Art &Tur International Tourism Film Festival in Torres Vedras, on 25 October 2019. SA Tourism film 'Bheki the Mbhaco Maker' beat 331 films from 52 countries to take the Grand Prix Award, as well as Best Country Film and Best African Film. The Embassy received the Awards on behalf of SAT, also having facilitated its entry! SA Films ‘Sides of a Horn’ directed by Toby Wosskow and ‘Overberg Meander’ by Sledgehammer Studio won first and second prizes, respectively, in their categories. Ambasssador Gaoretelelwe on 25 Oct took part in the a Art & Tur discussion panel on "Tourism Marketing & Destination Branding" with a focus on Destination SA.

The Embassy in Lisbon on 19 June 2019 celebrated South Africa’s National Day, which traditionally falls on 27 April, this year marking the 25th celebration of our country’s freedom and its 6th democratic elections. Around 100 selected guests were welcomed by Ambassador Gaoretelelwe and treated to tasteful South African dishes and desserts, award winning SA wines & Amarula and livened up by African drum beat and dance from Batoto Yetu.

Africa will celebrate Africa Day on Saturday, 25 May 2019, and in South Africa this year it will coincide with the Presidential Inauguration in Tshwane, to be attended by most of Africa’s leaders.  This  56th Africa Day commemorates the establishment of the original Organisation of  Africa Unity  (OAU) in  1963 – later becoming the African Union (AU) , with the  African continent becoming a pioneer in being the first continent to focus on continental unity, and to encourage nation building through unity and freedom from oppression.  Africa  Day and Month also seeks to increase the appreciation and demand for arts and culture goods and services, and to stimulate competitive markets for trade among African countries.

In Lisbon on 3 May 2019, Africa Day was celebrated through an event hosted by the 16 African Ambassadors accredited to Portugal, held earlier to accommodate Ramadan in the context of the African Muslim countries.  Speakers including the Secretary of State for Foreign Affairs and Cooperation, Ms Teresa Ribeiro, who highlighted the achievements of the Continent and looking at the challenges and opportunities ahead. Secretary of State Teresa Ribeiro stressed that Africa will be the main priority of Portugal’s Presidency of the EU Council in the first semester of 2021.

The event this year again took place in the form of a well-attended luncheon, with around 160 selected guests attending with cuisine prepared by Embassies from across Africa  - in the case of South Africa favourites like lamb chops, boerewors, pap & chakalaka and koeksusters & milk tart. The event also included a fashion show with traditional Africa clothing and garments, as well as musical performances from Cape Verde and a cultural (arts and craft) exhibition and arts and crafts exhibited from the various countries.

The Mayor of Estremoz - Francisco Ramos

I'm indeed pleased to be ‘joining hands’ with you today in honour of the art of Mandela here at the Castle of Évora Monte. I really feel like being on Top of Portugal here in the High Alentejo. We surely cannot ask for a more beautiful space for this event. Thank you also for hosting us for a most enjoyable and relaxing evening and morning at The Place at Evoramonte.

This historic Portuguese castle and monument as I understand was the site where you ended the Liberal Wars in 1834. The inside of this fortification, may have seemed similar for Nelson Mandela in his cell on Robben Island, the only difference being not trying to keeping the enemy out - but being locked up by them in the case of Mandela and cut off from the world for 27 years.

Last year we celebrated the Centenary of Mandela, during which South Africa and the rest of the world has been honouring his life under the theme: “Be the Legacy: Celebrating the Birth of a World Icon and a Life of Service”. Throughout the tribute-year, we worked at how to further the Mandela legacy of peace and justice, public service, self-sacrifice, reconciliation, personal development, and of changing people’s lives for the better! This came through various commemorations and events across Portugal – from a Concert in Matosinhos to an Academic Conference at Nova University, from naming a Mandela Square in Lisbon to unveiling a new Mandela statute in Madeira, and including your Parliament’s statement on International Mandela Day as well as various outreach programmes by ordinary people even in the smallest village. What a celebration and commemoration it was!

Thus we were so happy in January 2019 to hear about the House of Mandela Art Exhibition in Evora Monte, meaning our celebrations and honour of Madiba will continue!

Indeed, I am happy to join you in seeing a side of Mandela as an artist - not as known as him being the President, the international statesman, the boxer, the author, the Noble Peace Laureate, the negotiator and so much more.

So let us pause for a moment at Mandela the artist… I think Mandela – being the humble person we knew him as - was most likely a reluctant artist… maybe when the idea of making these art works came up, he would have said NO I can’t draw or paint, but then being responded to with one of his own quotes: ‘It always seems impossible until it is done…’ As we now know, he then got an Art Coach and it became the reality of what we are seeing here today under the House of Mandela Art Exhibition!

Mandela apparently said to his art coach after the first drawings: “I can say so much with these simple line drawings, why would I write another book when I can tell stories in my drawings!”.  I think that is the essence of this exhibition – that these simple drawings are bringing so much to us… they express and represent a history of one of the biggest struggles and triumphs of mankind over suppression under apartheid… a victory under his leadership over an evil system that changed the course of history forever. Small beginnings bringing us a major story and impact with it!

It started with the Struggle Series, 5 images depicting his life story - from his clenched fist, his bound hands, breaking the shackles, his hand extended to a child’s hand etc. Mandela then went on to create another 46 original works also including the Robben Island Series. But before I gave away all the secrets away let us rather get to see the exhibition!

I also can’t wait to finally become an artist by joining my handprint with that of Mandela and other guests. As Mandela said: ‘It always seems impossible until it is done…’

In conclusion, I would also like to thank Dr Makaziwe Mandela and Tukwini Mandela, as well as the other organisers and local authorities for ensuring that this talent of Mandela is shared with the world. Of course this event is allowing for some of you to take ownership of this Mandela artwork to the benefit of worthy charities, extending his legacy for generations to come. Viva Mandela! Viva South Africa!

The Embassy is happy to have participated in the 2019 edition of the BTL Tourism Fair to promote South Africa as a tourism destination among Portuguese tourism professionals and the public at large.  Thank you to our partners who participated in the stand with us: Across, Image Tours, Novotours, Ascottours and ATR.  A special thanks also to Mandilakhe Gwashu who came from Port Elizabeth to provide a taste of SA culture!

Mandilakhe Gwashu travelled from Port Elizabeth to Lisbon to once again offer a workshop in South African traditional dance in collaboration with the Batoto Yetu Youth and Cultural Association.  The workshop took place at the Marvila Library and Auditorium from 8 to 10 March 2019.  Thank you to all the participants for your enthusiasm and to Mandi for all your hard work! 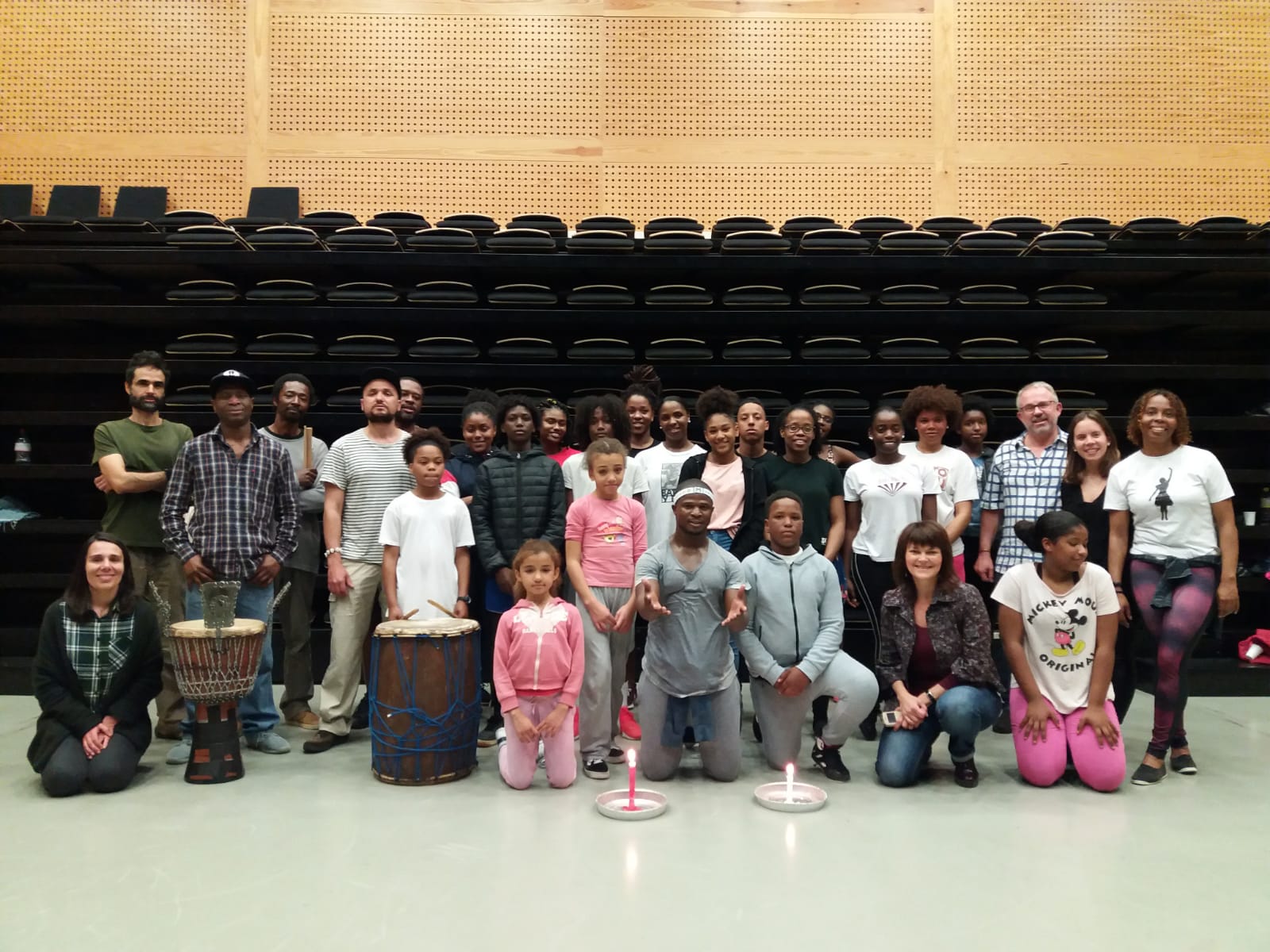